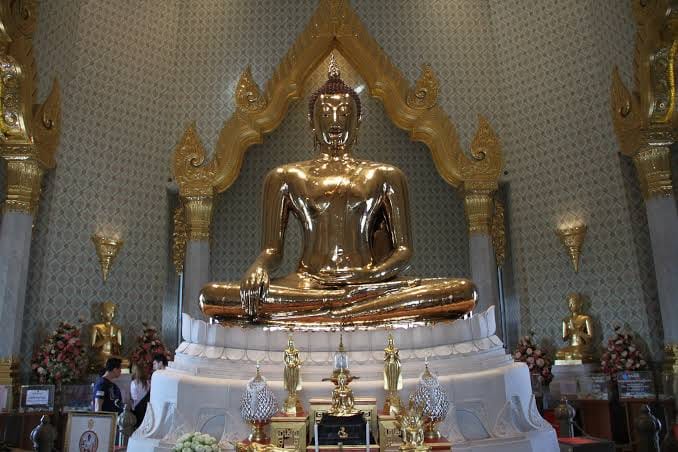 It was 1957, in Bangkok, Thailand, the government wanted to build a large highway through a village.
Yet, in the part of the planned road was a Buddhist monastery with a little chapel.

So, they had to relocate the monastery, including a heavy, eleven-foot clay statue of Buddha, to another place.
Using a crane, the government workers moved the monastery in sections. When the crane began to lift the giant idol, the weight was so enormous that it began to crack. What’s more, rain began to fall.

The head monk, who was concerned about damage to the sacred Buddha, decided to lower the statue back to the ground and covered it to protect it from the rain.

Later that evening, the head monk went to check on Buddha. He shined his flashlight under the covers to see if Buddha was staying dry. As the light reached the crack, he noticed a little gleam shining back and thought it strange.
As he took a closer look at this gleam of light, he wondered if there might be something underneath the clay.
He went to fetch a chisel and hammer from the monastery and began to chip away at the clay. As he knocked off shards of clay, the little gleam grew brighter and bigger.

Many hours of labour went by before the monk stood face-to-face with the now famous, extraordinary solid-gold Buddha.

Historians believe that several hundred years before the head monk’s discovery, the Burmese army was about to invade Thailand (then called Siam). The Siamese monks, realizing that their country would soon be attacked, covered their precious golden Buddha with an outer covering of clay in order to keep their treasure from being looted by the Burmese. Unfortunately, it appears that the Burmese slaughtered all the Siamese monks, and the well-kept secret of the golden Buddha remained intact until that fateful day in 1957.

Here’s what I want to draw out from the story. When the golden statue was covered with clay no one celebrated it, but the moment its true nature was revealed, its value skyrocketed.

As humans, we are also like the Golden Buddha covered with clay. Beneath all that you might currently be going through, you have greatness within.

Overcome The Fear of Invalidation