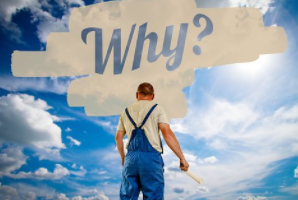 Questions come up to the surface of the observing mind when it assumes or sees for a fact that things are out of place. This could be the joke someone made, misplacement of an item, contradictions within a body of work, confusing experiences of life, nonverbal communication between people, or just about anything that disrupts. The thinking mind asks “why”. This questioning would not have been summoned if the mind was not observant, and observation would not have been active if the faculty of intelligence was not developed.

People have their intelligence developed to varying degrees. Some don’t even know they are intelligent because, to them, their display of intelligence is just a matter of living and expression, so why make a fuss about it.

It is rational to say that the level of intelligence of any individual will influence the extent to which they ask questions, having in mind that by being so intelligent they would be very observant.

The mind that is not asking questions is not in active use of its intelligence or is bereft of it as a result of mental health issues. This mind also is quick to find a fault in the mind that throws up questions or makes statements or takes actions that are the results of asking a series of questions.

Asking the why of whys is needed in our lives daily. Though this hobby of questioning can lead to overthinking, it often will not lead you to the wrong conclusions. This logical department of the mind will solve problems before they take full form. This logic of questioning will help people see through other people and to understand situations, concepts, and other life problems. This logical question-thinking mode will also help the individual understand his or her own motives should the lens of questioning be directed on the Self to understand why you act the way you do and what is really the motive to why you want some things that you want.

I implore you to activate “thinking by questioning” if you haven’t done so yet. If you have it in low degrees, nurture it to raise its bar.

If people have been asking questions, some confusion will not be active in their lives. They would have become freer because questioning brings some answers that free people from the bondage to lies, deceits, and every other situation that is veiled and against which questioning is disallowed.

Start asking questions about the things currently in your life. Read thought-provoking books and listen to thought provokers; those are good ways of making your mind a questioning one.

Overcome The Fear of Invalidation